Posts from the ‘The End of Protest’ Category

Mention in Columbia Tribune story on “law and order”

I’m quoted in a Columbia Tribune story that discusses the debate over “law and order” in American politics.  Read the story.  I discuss this more fully in my books The End of Protest and America’s First Great Depression.

“The End of Protest” now in paperback

The End of Protest: How Free-Market Capitalism Learned to Control Dissent has just been published in paperback by Cornell University Press.  Purchase on Amazon.  The cover design is by Istvan Banyai.

“The End of Protest” discussed in St. Louis Post-Dispatch

My 2013 book “The End of Protest” is discussed in an article in the St. Louis Post-Dispatch about post-election protests.  Read the article.

In the current issue of New Left Review, Malcolm Bull discusses my 2013 book, The End of Protest.  Go to the article.  Bull writes: “There have been  places, notably neo-liberal core countries like the USA and UK, where political protests have been small, sporadic and ineffectual. . . . In The End of Protest, Alasdair Roberts attributes this change to the growing intolerance of public unrest in market societies, and the effectiveness of policies of repression (legal changes with strengthened police forces to enforce them) and containment (the manipulation of urban space, enhanced surveillance and kettling), combined with economic appeasement (fiscal stimulus and quantitative easing) carried out by technocrats at central banks rather than the government itself. The result has been the atrophy of traditional forms of mass organization and the failure of new forms of networked protest to take their place.”  The End of Protest will be available in paperback from Cornell University Press in November.

Interview for Public Radio’s BackStory, on policing in America

Public Radio’s Backstory has just rebroadcast a show that includes a discussion between me and Peter Onuf of the University of Virginia on the development of policing in the United States.  The interview drew on work from America’s First Great Depression and The End of Protest.   Listen to BackStory’s show on policing in America.  My interview begins at the fifteen-minute mark.  My segment is titled “Running the riot.”

Governance has just published a review of The End of Protest.  Sina Odugbemi says the book is “a good read, bracing and forthright . . . The prevailing myth of the early 21st century is that we are in the age of networked protests, where ordinary citizens empowered by amazing new technological tools can overcome their collective action challenges, launch revolutions, change governments, humble the powerful and create a brave new world. Roberts shows that all that is naive and overly optimistic. At the heart of the text is a policing and law-and-order story of how authorities in the major economies of the West figured out how to contain, manage and immobilize the hordes of networked protesters.”  Read the review. 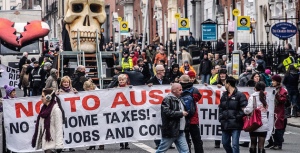 Following the launch of When The Party’s Over in London last week, I thought I would write this short note on Medium: Six Reasons Why It’s Easier To Impose Austerity.  Comments welcomed.

End of Protest now $1.99 on Amazon, intro on Medium 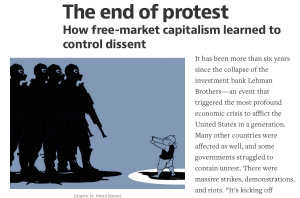 The introduction to The End of Protest can now be read on Medium.  Cornell University Press has reduced the price on Amazon to $1.99.

In the American Behavioral Scientist, Takis S. Pappas and Eoin O’Malley reference The End of Protest in their comparison of social unrest in Ireland and Greece following the financial crisis of 2008.  Read the article.  Pappas and O’Malley conclude that “the most compelling explanation relates to the varying ability of the Greek and Irish states to continue providing basic public goods and other state-related services to their respective societies.”

n+1 magazine reviews End of Protest and Logic of Discipline 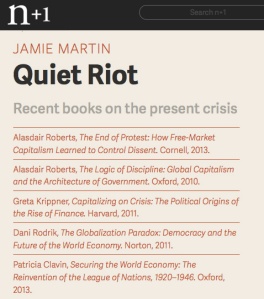 The Fall 2014 issue of n+1 magazine includes a review essay by Jamie Martin discussing The End of Protest and The Logic of Discipline. “The 2008 crash and its aftermath have amounted, as the legal scholar Alasdair Roberts argues in The End of Protest, to little more than a ‘quiet crisis.'”  Read the review.